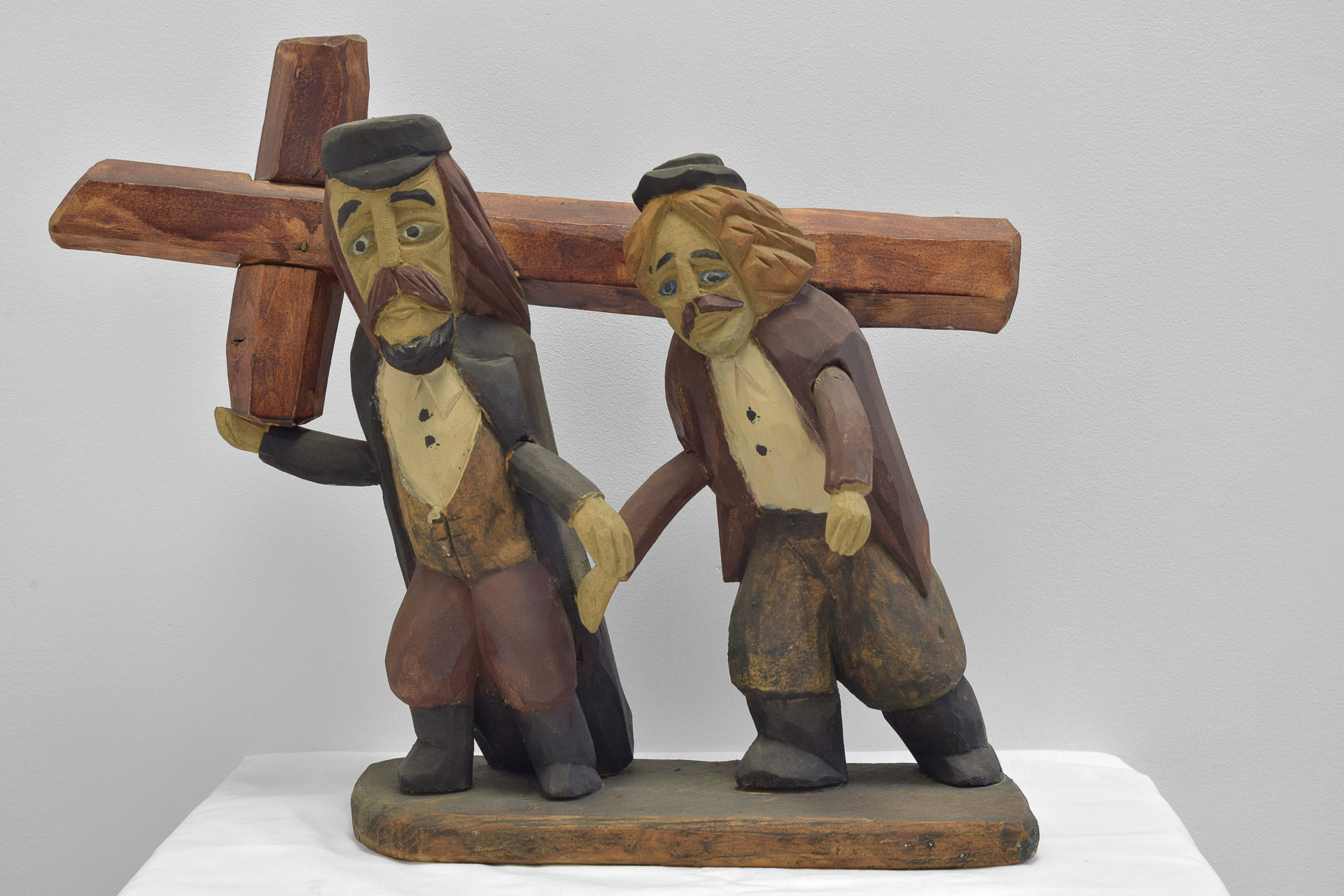 Adam Zegadło was an uneducated Polish Catholic peasant who was orphaned as a young man and taken under the wing of a Jewish factory owner in the town of Suchedniów, who employed Zegadło for 14 years and treated him as a member of the family. Zegadło was devastated when the Nazis took the man and his family away to Treblinka (1942). He is said to have begun to carve figurines of Jews in the 1960s, at the urging of the director of a local museum.

Samuel Fiszman was an acculturated Polish Jew from Radom, a convert to Catholicism, a scholar of Slavic literature, and a collector of Polish folk art. He bought objects at Cepelia and ordered works directly from artists. He was the founder and editor in chief of the journal Slavia Orientalis at the Polish Academy of Sciences, and his friends and correspondents included intellectuals such as Xawery Dunikowski, Czesław Miłosz, Julian Tuwim, and Pablo Neruda. At home the family had both a Christmas tree and a menorah, and his daughter said he was “always trying to find things that showed that different cultures could live together in peace.” He lost his family to the Nazis at Treblinka, and later also lost his beloved homeland as a result of Poland’s March 1968 anti Semitic campaign. He finished an academic career that began in postwar Soviet Moscow, and flourished at the University of Warsaw, at Indiana University in Bloomington, USA. A Polish patriot until the end, he spoke out in protest in the USA whenever he heard the term “Polish concentration camps.” His forced emigration from Poland was the defining tragedy of his life. His dying wish was that his folk art collection – and his own ashes – be returned to Poland. Both wishes were fulfilled.

The sculpture on this table was purchased by Samuel Fiszman (and probably made by Adam Zegadło) in 1969. It was the last work he bought before emigrating from Poland in October of that year. The Warsaw State Ethnographic Museum (PME) inventory card notes the title of the work as Shared Lot (Wspólna dola), but another title, Shared Work, Shared Burden (Wspólna Praca, Wspólny Ciężar) is inscribed on the sculpture’s base. Carvers did not typically name their works; titles were more often given by museum bureaucrats for documentation purposes, or collectors requested them from or determined them with artists to add meaning to their purchases. This work was donated to PME in 2001 from Bloomington, Indiana by Samuel Fiszman’s wife Alicja (Zadrożna) Fiszman. Jadwiga Migdał, the PME employee who signed the inventory card, suspects that in the intake interview Alicja Fiszman simply gave the name her husband used personally to refer to the work, rather than the original, however it had come about.