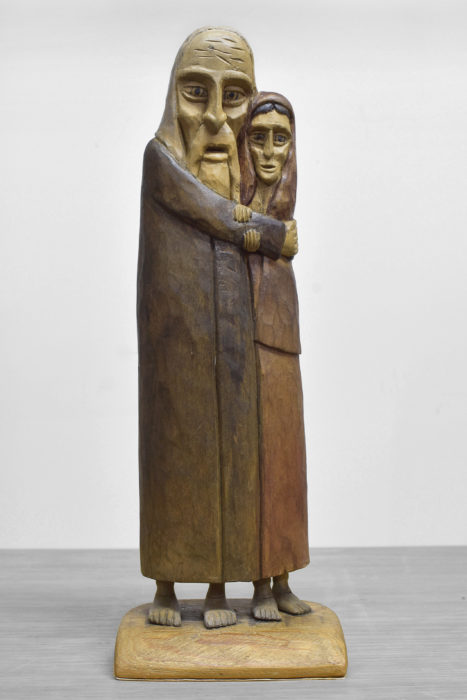 “The Final Path” in the Lives of These People. “Jews” – Oświęcim – Hełm

Wacław Czerwiński born in 1911. During the First World War Czerwiński was shot in the leg, and for a long time after he was unable to speak. During World War II, he was interned in the prisoner of war camp at Moosburg in Upper Bavaria. The wood carvings (including Jewish figurines) that he made there were objects of informal exchange with the camp guards. After the war he lived in Świnice Warckie, about 20 km from Chełmno on the Ner River, where the Kulmhof Nazi German extermination camp was located. Died in 1986.

“I began carving Jewish figurines as an accusation of the Germans. They killed living people, and I carved them in wood, I depicted them, I showed [the Germans].”

At least four versions of this sculpture exist, depicting a man and woman embracing. The first (currently unavailable for display), purchased in a Cepelia shop, is said to have inspired Ludwig Zimmerer to collect Polish folk art. The one on display here was commissioned by another German collector, Hans-Joachim Schauss, “a friend,” according to the artist’s inscription on the sculpture’s base. It is made of wood from the area near the Chełmno/Kulmhof camp.